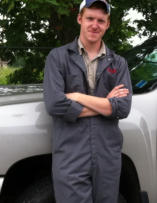 Dr. Aalders grew up in South Alton and owes his veterinary passion to his grandfather who was like many mixed small farmers of a bygone era, who teamed oxen, had one milk cow, a dozen chickens, and sold pulpwood.

Josh graduated from Central Kings High School in 2005 and went to Acadia University for two years to pursue a Bachelor of Science. He transferred to the Nova Scotia Agricultural College where he finished his degree in Animal Science in 2009. That same year he was accepted into the Atlantic Veterinary College where he graduated in 2013 with a Doctor of Veterinary Medicine. He joined Cornwallis Veterinarians in 2013 and became a Partner in 2014 where he enjoys the practice of Large Animal Medicine. Dr. Aalders’ interests are in: bovine and small ruminant herd health, advanced techniques in bovine ultrasonography and reproduction, equine preventative health. Josh is excited to be able to once again call the Valley his home. Outside work Josh enjoys working in the woods, working on machinery, and staying active in all seasons