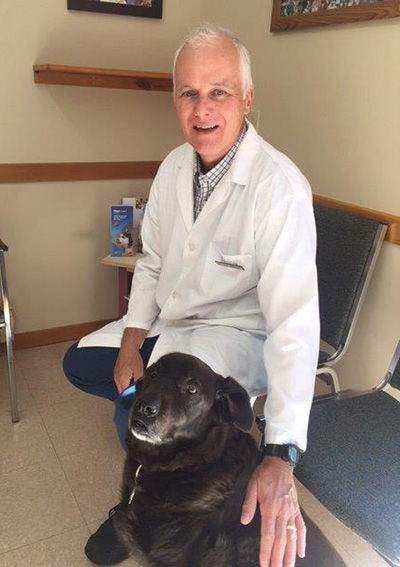 Dr. Roberts was born and raised in Dresden, Ontario, where his father, Dr. Lea Roberts, practiced veterinary medicine for 36 years.
In 1980, Dr. Roberts graduated from the University of Guelph with a Bachelor of Science degree. He continued his studies at the Ontario Veterinary College, graduating in 1984 with Doctor of Veterinary Medicine. Dr. Roberts joined Cornwallis Veterinarians in 1988 and became a partner in 1990 where he passionately practices companion animal veterinary medicine. Dr. Roberts has and continues to be very involved in committees committed to a high standard of practice for veterinary medicine. These commitments include: President of the NSVMA in 1994; served as the NSVMA representative on the Nova Scotia Rabies Prevention and Control Group; served as the Nova Scotia representative on the Canadian Veterinary Medical Association from 2001-2011; was President of the CVMA 2010-2011; served on the National Issues Committee of the CVMA, represented the CVMA on the Atlantic Veterinary College Advisory Council, served as the Canadian representative to the PanAmerican Association for veterinary sciences from 2011-2016 and is currently a member of the joint American/Canadian Veterinary School accreditation team. Since 1989, Dr. Roberts has lived in Port Williams, NS, with his wife, Sue, their five children and various pets (dogs, cats, rabbits).